How did the first particles come into existence without a creator god?

Jain scriptures dictate that the universe has been eternal and will always develop & destroy on its own. There is no creator god as per Jain knowledge due to the fact that such creator god hypothesis creates further problems such as who created the creator god if he created everything in the universe etc.

With that in mind, I’d like to know how did it all begin? from where did the first matter or particles come? or how did the 6 dravyas came into existence because eternal & infinite also has a beginning!

because eternal & infinite also has a beginning!

There is no beginning. It never began. It always existed.

That is only possible in the case of an infinite loop. But even for a loop to be created, there definitely has to be a starting point. Infinite might seem incomprehensible to inferior minded humans like us but it is surely quantifiable in the knowledge of the Arihant & Siddha parmesti.

Understanding what Jainism actually wants to say is very rare.

Understanding Jainism completely is not for inferior minded. प्रकृति is made that way.

Still all souls try as much they have got. Nobody is wrong. Even by thinking a creator God, many people eliminate their fear and get meaning of life. They may be wrong but still they try their best to live a pure life. It may be मिथ्यात्व but what else they could have done with inferior mind.

you said ‘how did it all begin’…begin what? particles? if universe is eternal i.e particles (6 dravaya) then they exist all the time…even a vacuum space has energy… so there was always existence… if we say creator god…then what particles is god made from ?how come he gets to be conceivably eternal? but not universe? also if god is all sufficient and complete in itself there is no need to create universe? what god wanted from universe? infinity loop also applies to creator god…

This will cause infinite chain of thoughts before hence god will never arrive at decision to create universe as god has to traverse thru infinite thoughts before them…hence creator god concept does not make sense.

That is only possible in the case of an infinite loop. But even for a loop to be created, there definitely has to be a starting point.

As referenced by @Sanyam_Shastri, the MMP gives the best explanation on accepting the infinity in every aspect that there are so many unanswered problems in thinking the starting point so it makes it very favorable to accept infinity. 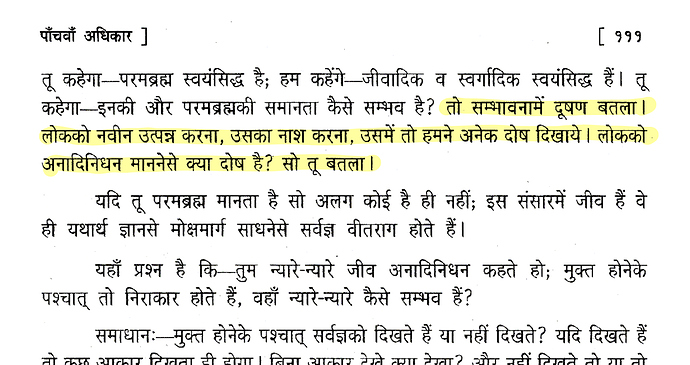